Beating the Boys: My Journey as a Girl Wrestler

As one of the wrestlers featured in Girls Pinning Boys: a History and Evolution of High School Wrestling, I am deeply humbled by the attention that the match has received and the impact that the lessons learned have had on other girl wrestlers.  Even beyond wrestling, both boys and girls alike have found inspiration from it and told me their stories of triumph.  For this, I’ll always remain inspired by them.

Although the video of the match has been viewed over 139,000 times by a worldwide audience and has been very well received, what it shows remains deeply personal to me.  It represents the time and effort that I put into wrestling and the adversity that I overcame.  It also clearly shows how others were not ready to overcome adversity themselves and instead chose to run away.  I’ve used my perseverance as a foundation throughout high school and college, and now in my career.

My brother, Frank Hernandez, would always record my matches and post them on his YouTube channel.  Back then, I actually thought it was more annoying than anything else!  But now I am forever grateful that I can cherish those moments and humbled that it has made such an impact.  Seeing that other wrestlers, regardless of gender, have been inspired by it and used it as a source of motivation for themselves is incredible.

This was an away match for my school, James Monroe High School, during my junior year.  We were wrestling against the Belmont Sentinels in Los Angeles.  I was only in my second season, so I was still relatively new to the whole sport.  That day, I learned that I would be wrestling against a boy, which was normal for me because girls were not yet participating on wrestling teams anywhere near the levels that they are now.  We were in my opponent’s home gym at Belmont where there were about 25 people in the stands.  This match was closer to where I lived, so my family was able to be there.

I’m very happy that my best friend, Madye Lopez, and my brother came to watch me wrestle on this day and recorded the match.  Although Madye went to a different high school, she always made the time to support me.  She was obviously very excited to see me win and, as she says at the end of the video, to post it on social media to share with all our family and friends.

The video eventually went viral and was seen by hundreds of thousands of people around the world, even my old wrestling teammates were sending it to me and congratulating me on it.  I couldn’t anticipate the popularity that it would have over 10 years later!  My whole family has congratulated me on the victory again and the friends I have made since high school have said they thought it was badass that I was able to do this.  Almost everybody that I know has seen this match, it’s such a great memory.  The fact that it will be on the Internet forever is hilarious and very exciting.

During the match, my opponent tried to push me in an attempt at scaring me.  He had some strength in him, but I kept motivating myself to focus and persevere.  Before my match started, one of my coaches said he knew that I could pin him, so I was using that for motivation.  I didn’t think I was going to be able to pin him so fast, however, but once I got him down I was able to keep pushing.  I was looking at my coaches and heard the crowd get louder as I was able to lay him out completely on the mat and eventually heard the whistle.

After pinning him so quickly, my coaches and teammates were all very happy for me.  I hugged both of my coaches and heard all about how great of a win it was from my teammates.  I was slightly in shock at how negatively my opponent reacted to it, but I quickly snapped out of it after the referee made him come back.  My whole team had agreed that what my opponent did was very poor sportsmanship.  While my team celebrated my win, it was actually my opponent’s own team and student section that shouted out “you got beat by a girl!”

I, unfortunately, had encountered similar negative responses from my boy opponents in matches before and after this as well.  My teammates and coaches were always very supportive of me and helped me to overcome these situations.  In this case, they all encouraged me to not let his anger and frustration get to me, but rather to focus on my convincing victory over him instead.

Wrestling, for me, was always a sport that presented new challenges both on and off the mat.  Although I would win some matches and lose others, I had to constantly block out the negativity and noise from other people so that I could focus on making weight, improving, and trying to win.  I didn’t have time to think about what other people were saying.  Being able to avoid distraction while trying to pursue a goal is something that has benefited me greatly in the years since then.  It wasn’t always pretty, but these experiences did a great job at mentally preparing me for how hard life can be at times.

I put in a lot of hard work to be able to wrestle for my school.  I would constantly have to stay late for practice, including during winter and summer breaks, and have to take the after-school bus from Los Angeles to the Valley during the school year.  I would come home very tired and still have homework and chores to do.  After matches, the school bus wouldn’t be an option so I would need to take the Metro home or my brother would give me a ride when he was not working.

When I wasn’t practicing or competing, I would need to hit the weight room, including during the off season.  In addition to wrestling, I played softball, did the Students Run LA marathon, and some obstacle course challenges.  My family and friends provided an amazing support system so this actually was able to work out very well.  There is no way that I would have been able to wrestle without this set of people around me.

Growing up, some boys would make negative comments even outside of sports.  They would say things about me being a tomboy or about being physically strong; I didn’t match the stereotype that they had for how a high school girl was built.  I’ve always found strength in self motivation and finding what I wanted to accomplish without worrying about what other people’s perception of me is.  This has served me very well.

Today, I am an Operations Manager in the security industry, which happens to be a male dominated career path.  My wrestling experiences have helped immensely as my role and responsibilities have evolved over time, especially as I’ve become a manager.  There have been times when this path was not always so pretty, but I’ve continued to persevere and make the most out of the opportunities that have come my way.

In today’s society, there are often challenges for young Latina women when being put in a position of authority.  It’s not always easy for some people to adjust to this, especially if you are close minded and not ready to accept people from different backgrounds or generations.  I’ve looked back at what I learned in high school and continued to do my job without letting them get to me the way that they wanted to.  I’ve found success in this and been promoted four times.

How you respond to situations like this will define the person that you are.  Growing up as a wrestler, I developed a strong will, learned respect and discipline, and never quit in anything that I did.  I used that experience throughout my Bachelors and Masters programs, both of which were physically and mentally demanding.

I think this is why the video of the match has been so impactful.  It shows a contrast between someone who pushed forward and never quit against someone who was not ready to take the heat and quickly gave up when things got tough.  The boy who walked away was not ready to accept his own shortcomings or acknowledge that I had beaten him.

As a result, we’ve both taken very different paths since this match.  I’ve used these experiences to build a foundation for myself that I’ve derived a lot of success from, both inside and outside of my career.  Although my opponent in this match is now a software engineer, I can only hope that he can find his life as fulfilling as mine.  I am very proud of this match and thrilled to see that it will be online forever to show the contrast between me and him for the entire world to see.

While you don’t need to be a wrestler to understand perseverance, dedication, and hard work, I certainly think that these lessons can inspire the next generation of girl athletes.  You are only successful in things that you commit yourself to; the hard work will pay off and you will reach levels that you didn’t think were possible.  My advice would be to do exactly what I did – block out the noise, avoid the distraction, and work hard to achieve the goals that you put in front of yourself.

It’s so refreshing to see that girls wrestling has substantially increased in popularity since this match over 10 years ago.  I sincerely hope that one day we will all be considered equals when we step on the mat and seen not by gender, but as the wrestlers that we have become through our blood, sweat, and tears.

This article is in the public domain and may be reproduced without consent if credit is given to Sisterhood of Wrestlers.

Read the the other article about Rosey here: Girls Pinning Boys: a History and Evolution of High School Wrestling. 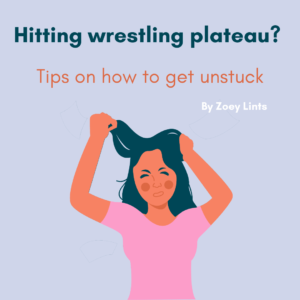 Trending
Hitting wrestling plateau? (Tips on how to get unstuck) 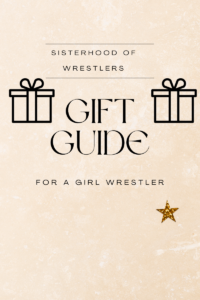 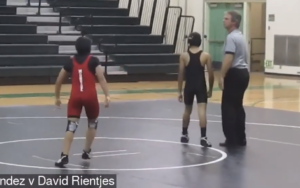